Bitcoin remains unbeatable as far as adoption is concerned. However, over the years, many competing blockchains have surpassed Bitcoin on the fronts of network functionalities and scalability.

This has even lead to many youngsters terming it as the “boomer coin” since it is now invested in more by institutions, big-ticket players, and seasoned investors. On the other hand, altcoins, although speculative and risky, have the potential to offer greater returns with their exponential surges. Ergo, it’s no surprise that these are being preferred by many young risk-takers.

That is not to say that Bitcoin has lost any supporters, however, with a host of reasons encouraging proponents to stick by it. Macro-investment strategist Lyn Alden highlighted some of these on a recent podcast, focusing on why Bitcoin is fundamentally different than all altcoins.

Now, unlike precious metals, an unlimited number of similar blockchains can be created. In fact, people might even perceive that as threatening to Bitcoin since this could diffuse the intended scarcity created by its limited supply.

However, according to the investor, people don’t understand how “one blockchain is better than another in terms of security and moneyness.”

The key to Bitcoin’s superiority is its network effects, with the number of users directly contributing to the value of the network, she said.

Alden also used an analogy with Wikipedia to further explain the point. Replicating the website’s content or source code would not result in the same amount of traffic that the original receives. She added,

The Lightning Network, BTC’s layer 2 payment platform, can only be expected to enhance its already superior network effects.

“Overall, that’s what separates Bitcoin from other tokens, and it’s mainly why we view that one as money and everything else [as], at best, equity or at worst, a scam, compared to Bitcoin itself.”

The investor was also quick to highlight how the hardware is also on Bitcoin’s side. There are many wallets and platforms that cater exclusively to BTC, along with the ones that support varied tokens. This gives the top virtual currency “an increased kind of surrounding ecosystem.”

Nevertheless, Bitcoin’s superiority in these aspects can’t overshadow the groundbreaking performance several alts have noted over the past couple of months. While Bitcoin has done well of late, some cryptos like ADA and Solana have managed to hit new highs on the back of constant network upgrades.

This has even led many to predict that an altseason might be in the books for the crypto-community. 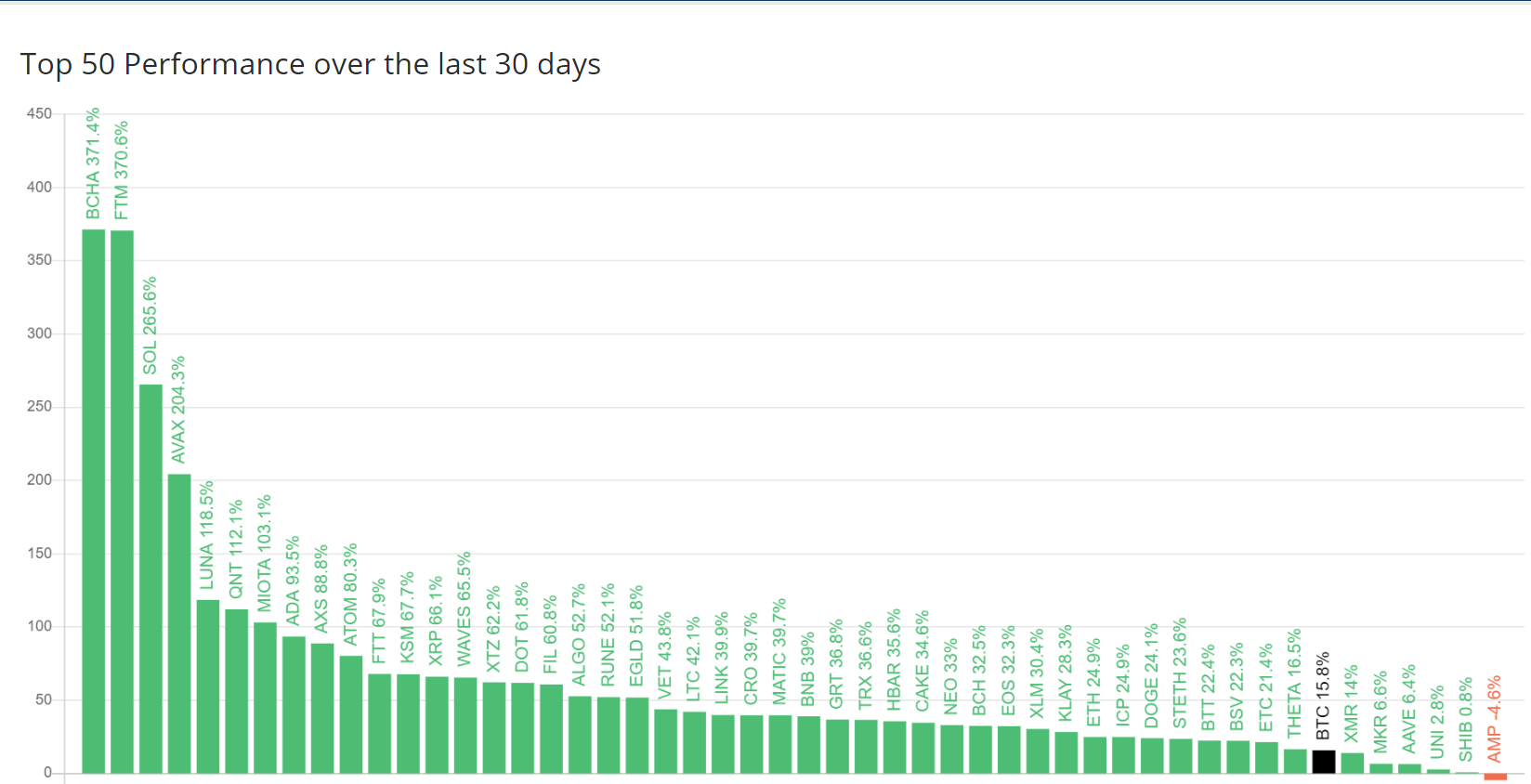 Here, it should be noted that an alt-month is already ongoing. 88% of the top 50 coins performed better than Bitcoin over the last 30 days.

As can be seen from the chart attached herein, top altcoins like Bitcoin Cash, Solana, ADA, and Luna have given Bitcoin a run for its money, with some noting gains upwards of 300%.