On-chain data shows Bitcoin whales are currently showing the largest movement since 2017. Here’s what it might mean for the crypto.

Current Bitcoin Whale Activity Is The Largest Since 2017

As pointed out by an analyst in a CryptoQuant post, on-chain data shows signs of big whale activity not seen since 2017.

The relevant indicator here is the “tokens transferred mean” metric, which tells us the mean amount of Bitcoin involved per transaction.

High values of the indicator imply there are some big transactions taking place on the network. This would suggest that there is ongoing whale activity during the period.

On the other hand, low values mean the Bitcoin blockchain is experiencing usual transaction activity for the most part. This would imply there is little whale activity on the network.

Now, here are two charts that compare the BTC tokens transferred mean values between 2017 and 2021:

As you can see in the graph to the right, whales seem to be currently moving their coins in large quantities as average transaction amount has shot up by 5x.

Related Reading | Taproot Is Live! The Community Reacts To Bitcoin’s First Upgrade Since 2017

This kind of whale activity hasn’t been since 2017, where a similar trend was seen as the chart on the left highlights. Though there have been a few outliers in the years in between.

The fund flow ratio, another Bitcoin indicator, tell us what part of the total network transactions is occupied by transactions happening to and from exchanges.

Interestingly, as the analyst says, this metric reveals there aren’t currently many transactions happening on exchanges.

This may suggest most of these big whale transactions aren’t coming from exchanges. The analyst makes a speculative guess that this trend may indicate OTC deals are happening due to increasing interest from institutional investors.

The below chart shows the trend in the price of the coin over the last five days. 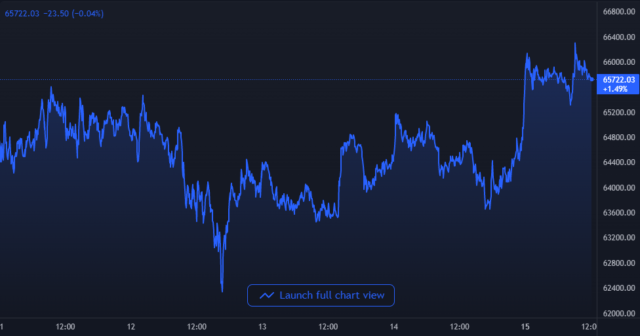 After Bitcoin set its new all-time high around $69k, the price of the crypto crashed. Since then, the value of the coin has touched down to as low as $62k, but in the past few days it has recovered a bit.

It’s hard to say at the moment where BTC might head next from here, but rising whale activity (and hence, institutional activity) can be a bullish sign.