Cardano’s price climbed 11.5% in a week and while its price jump from the July lows of $1.1 to the current price of $1.4 might look more or less monotonous there’s another take that often goes unnoticed. The fact that Cardano didn’t fall below the $1 mark and had a comparatively less volatile market during the last bear market brings forth the fifth-ranked alt’s tendency of getting less affected by the larger market.

The speculations of ADA following Bitcoin and Ethereum have been around for quite some time. As a matter of fact, building institutional interest for Cardano makes this argument more valid. ADA is the third-largest holding in Grayscale’s large-cap fund boasts a 4.26% allocation.

However, it’s not just institutional interest but also retail interest that garners the ‘trusted status’ for currencies. In the case of ADA, the asset seems to be doing good on this front too, and the news about ADA getting approved for listing on Japanese cryptocurrency exchanges, against all odds highlighted the same. The reason why this news holds importance is because Japan has one of the hardest listing requirements globally.

Even though ADA was down almost 40% from its ATH, it highlighted YTD returns of 695.25%. Its 7-day ROI stood at 10.61%, one month ROI 10.01%, and yearly ROI was 950.39%. That being said, ADA’s Sharpe ratio which assesses the performance of an asset compared to a “risk-free” asset over a window of time held well above the zero mark at press time. 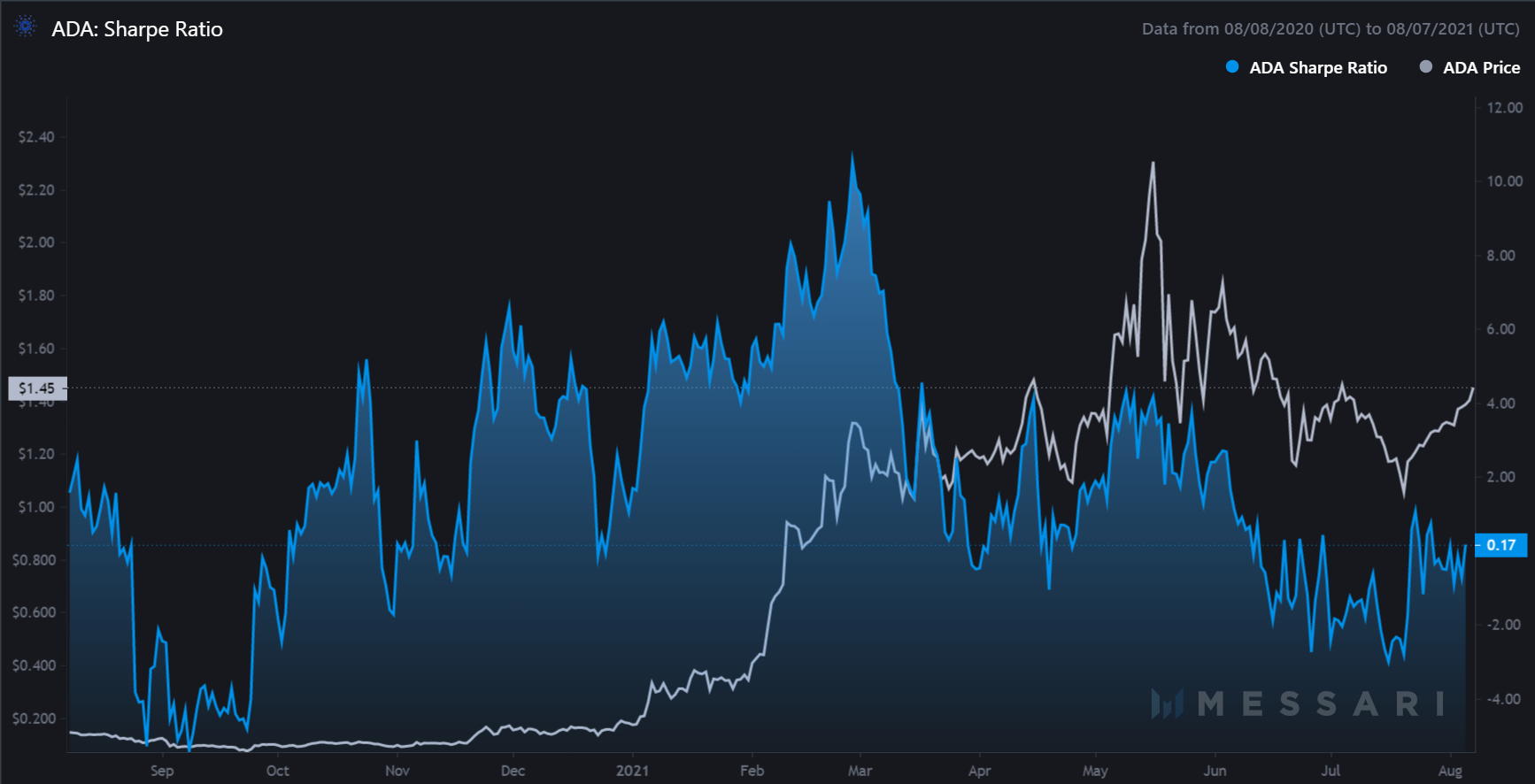 While the Sharpe ratio numbers might not be too impressive at first glance, what’s notable is that even during the recent price dips ADA’s Sharpe ratio didn’t fall below the -2.5 mark whereas the same for Ethereum had fallen down to -4.1.

As highlighted in a previous article, the strength shown by mid-term holders and long-term holders in the case of Cardano has been a major factor in fueling its rally. ADA holders have seen a steady jump and so have the cruisers. In fact, there has been a 6.86% decline in traders in the last month for ADA highlighting growth in stronger hands in the ADA market.

While ADA’s active addresses had grown 417.81% between January 1 and April 28, the growth wasn’t just superficial as it was also backed by growth in the number of transactions per day. Looking at this it doesn’t come as a surprise that Cardano has actually started to follow the footprints of the top two coins (BTC & ETH). In fact, such reasons coupled with Cardano’s solid roadmap contribute to its sustained growth and rallies by giving Cardano its functionality value both in terms of transactions and as a comparatively safer store of value.