Dwarf Fortress is the ideal of gaming, the kind of thing we like to think of as what gaming is all about: a passion project made by someone insane slash brilliant (one guy!) over 20 years. It can quite literally simulate hundreds of years of history including ecological events, personalities, books being written, and the rise and fall of civilization before you even get into it. Frankly, most of your modern colony sims are Dwarf Fortress with the edges sanded off (and I love colony sims).

But those edges are part of the fun. When a naked dwarf goes insane because their cat died and starts attacking everyone and everything, but then your dwarven police beat them to death, but the dwarf cops were all that first guy’s friend and THEY go insane and start vomiting everywhere, THAT is when you’re entering the party zone.

And I want to be clear when I say “simulate hundreds of years”, I don’t just mean “Yeah we put a clickable diary in a cave.” My first go in this build, I settled for 250 years of history and had several minutes to contemplate while the game generated over 500,000 distinct events. And then I got in and screwed everything up with a bunch of short, drunk lunatics. 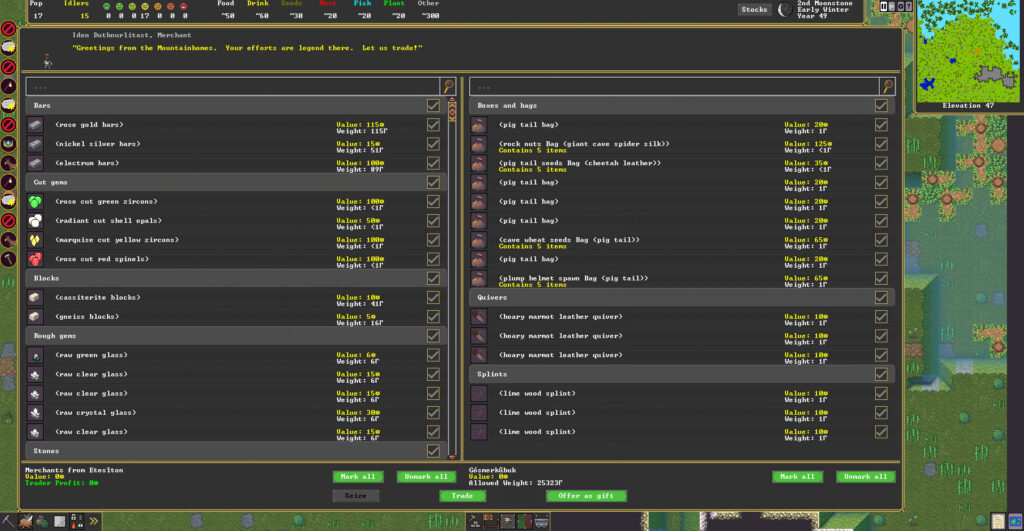 The thing about it is: Dwarf Fortress was kind of unapproachable. Toady, the guy behind the game, didn’t care so much about “having a Windows interface” as he did writing this behemoth. So it sort of had mouse support, but mostly it was weird keyboard shortcuts and submenus and obscure things in obscure places like your less-friendly Linux flavors. For example, if you wanted more than basic ASCII graphics, you had to figure out how to install “tilesets”. If you wanted to know how the game systems work, you had to peruse forum threads and wikis and get in and play and lose over and over again and go “okay but why did that guy’s cat dying lead to the death of my once-thriving civilization?” Look, just start with Boatmurdered.

When Kitfox Games announced they were publishing a Steam version(!) with actual graphics(!!), those of us in the deranged lunatic community wondered if things would be okay. Sure, they did Boyfriend Dungeon and are a bunch of indie weirdos, we’re not talking about EA filling it full of Seasonal DLC Lootboxes…but you always wonder if they are going to screw it up. And sure, I was making jokes as I loaded it like “IT’S RUNNING IN WINDOWS AND I CAN CLICK ON THINGS, I’M SCARED”…but I was actually kind of scared. 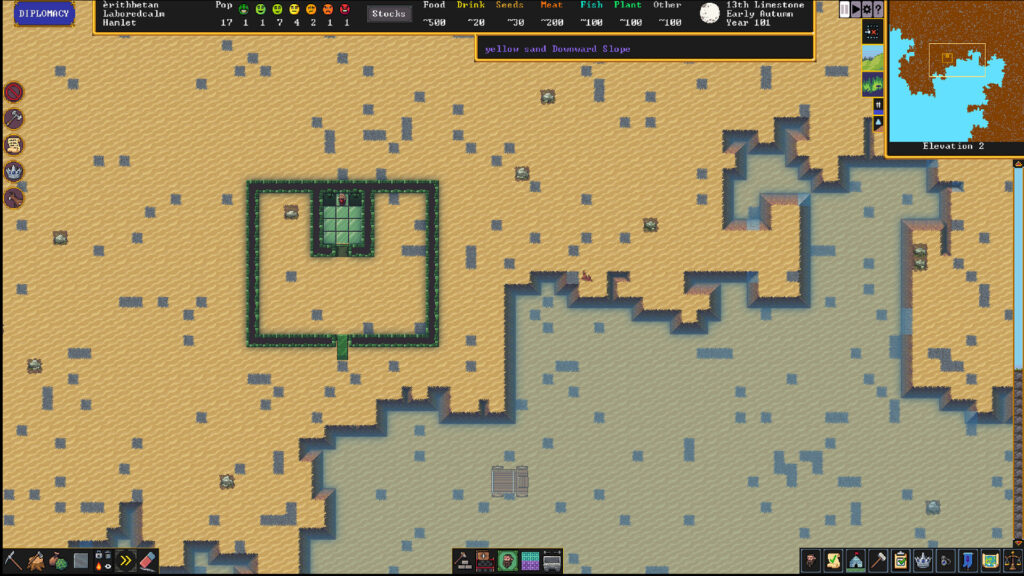 And I think they did. The graphics it comes with are like a crossover between a Super Nintendo game and an actual map. It has menus and mouse friendliness, but the menus maintain that kind of janky solo maintainer feel. They really did manage to give it an interface that is semi-modern, but it still feels like a passion project but one that doesn’t require downloading and installing third party tilesets.

There is a TUTORIAL, my god. And not one you have to play through by following a Wiki or watching videos. But never fear, I did manage to screw up and wind up buried 40 layers deep even in the tutorial. The controls are still kind of baroque and require some figuring out. There is a little toolbar at the bottom with buttons that indicate what menus and submenus they open, but you still might wind up 8 screens deep trying to build something.

Did it take me a few minutes to figure out mining wasn’t working because I was trying to mine UP IN THE AIR and not DOWN IN THE GROUND? Yes! Did I have to take a few goes at the tutorial to figure out how to get things going compared to what I vaguely remembered? DID I! But it was still just as rewarding to start getting my workshops and beds built so my little dudes could sleep indoors. 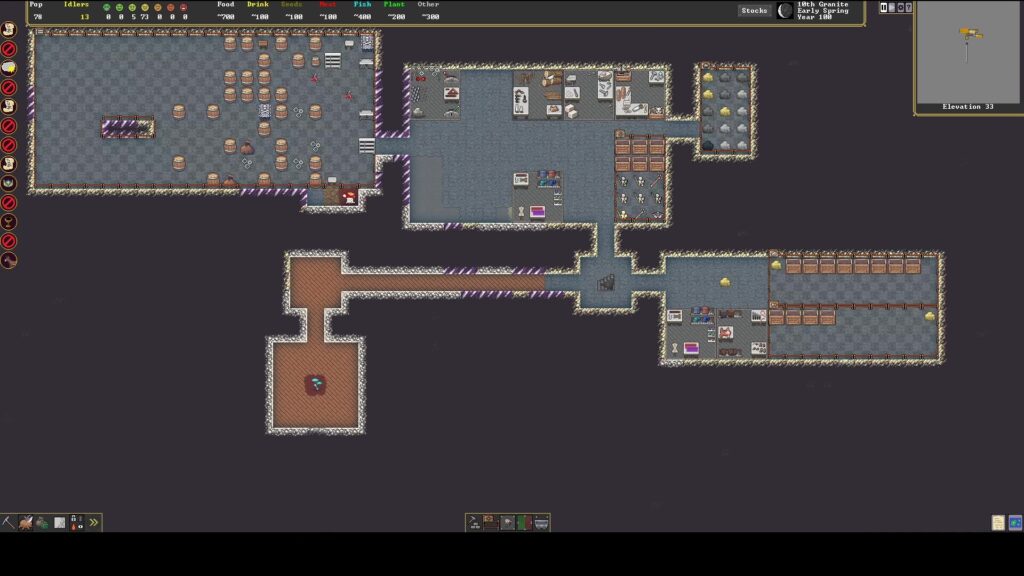 You also don’t need a third party utility to manage your dwarfs without losing your mind. Clicking on your little dudes gives you ALL THE INFORMATION you’re used to and I do mean all of it. They’re feeling pleasure being near a fine bed? YES! They are satisfied at work? BRILLIANT! They yearn for death? FANTASTIC! Wait..

So there are some quality of life touches like easily understandable alerts for bad things happening. There’s a help that’s easy to find and read. But “losing is fun” is still written into the tutorial (which it, again, has), and you’re still going to be trying to figure out which of 1700 systems you pissed off to get your fortress flooded (watch out for aquifers!).

If you’re completely new, there are three modes: fortress, the one I’ve been ranting about; Adventure: basically that 500 year old world? you get to play an RPG in it. This wasn’t in the build I played; and then Legends: You can literally poke around historical events, sites, regions, everything it generated from a godlike perspective rather than having to explore everything yourself or build a fort with a bunch of deranged idiots.

I think they’ve done it. This is the classic Dwarf Fortress experience but with nice graphics, some quality of life improvements, and more robust mouse support. Strike the earth! Don’t slip on the puke!

The Final Word
By jove, I think they’ve got it!