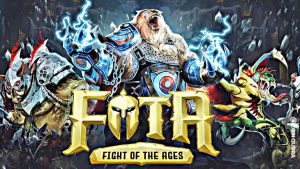 As 2022 begins, the crypto world is still firing on all cylinders and hitting new heights. And there’s no part of the industry that’s hotter than GameFi. According to the Blockchain Gaming Alliance, the industry generated $2.3 billion in revenue in the third quarter of 2021 alone – and projections indicate more stellar performance to come.

But what’s interesting is that the industry’s generating all that revenue through games that are – for lack of a better word – conventional. Most of the top performers are crypto games that aren’t much different from popular mobile games. The principal difference is that they add in a financial incentive in the form of a crypto-backed economy and play-to-earn game mechanics.

So far, though, it’d be hard to call anything coming from the GameFi boom groundbreaking. But that’s what makes a new game, called Fight Of The Ages, so interesting. It’s a new crypto game that’s being built from the ground up to take advantage of Microsoft Mesh technology. That means it’s got mixed reality (MR) capabilities built into its DNA, and that makes it stand out from the pack. Here’s what the game’s about, and why it may end up being GameFi’s first true groundbreaking game.

The fact that Fight Of The Ages is built to be an MR game means that it will likely enter the market as the first crypto game to provide a true immersive metaverse experience. It will be the kind of game world that players can explore in 3D – using any compatible platform.

And its developers intend to maximize the game’s reach by developing it simultaneously on a variety of platforms using the Unity 3D game engine. The game will have clients on Microsoft Windows, macOS, Android, and iOS. It will even be accessible through modern web browsers using the WebGL API. Players can choose their preferred platform and experience the game however they wish.

Mixed reality is a useful feature – but only if the game using it does something interesting with it. And Fight Of The Ages seems to have found a gaming niche that lends itself well to the technology. The game itself is an AAA multiplayer online battle arena game, with multiple gameplay modes to suit every kind of player.

There is a 30-level quest-driven campaign mode where players can explore the game’s three principal worlds, The Greenland, The Earth, and The Nightmare. In those worlds, players will have to complete challenges to earn rewards in the form of the game’s native FOTA tokens and experience points. There are also plans to hold special monthly and seasonal quests that add new challenges with even greater rewards.

Beyond the campaign mode lies the game’s main draw – its multiplayer battle arena. There, players can participate in player-versus-player battles with others. The game’s built-in battle-matching system makes it so that players may only battle others of a similar level to keep things fair. But if they wish to test their skills against stronger competitors, they can use a challenge mode to take on any player they choose.

Fight Of The Ages, as every modern crypto game does, includes built-in play-to-earn mechanics that make gameplay a lucrative proposition for players. To start with, game assets are tokenized in the form of player-owned NFTs. That means players have ownership of their characters, game items, land, and even player skins. They can upgrade those items through gameplay and sell them on the game’s built-in marketplace whenever they want.

Or, they can take part in a mechanic that most other games don’t offer: rent-to-play. Owners of Fight Of The Ages NFTs can monetize their hard in-game work by renting out their assets to other players. That way, it’s possible for players to build up a stable of valuable characters and game items and then turn them into an ongoing income source – even if they never play the game again.

Altogether, Fight Of The Ages has all of the makings of a GameFi game unlike any that have come before. And interested players aren’t going to have to wait much longer to get a look at it. Although the completed MR experience won’t be ready right away, the core of the game is expected to see an alpha launch on iOS, Android, and PC by February.

And if all goes well, the MR integration should take place at some point during the second quarter of 2022. That means the crypto gaming world may be about to see a fully-functional MR crypto game as early as April. That’s a timeline that puts Fight Of The Ages not only well ahead of any similar game concepts, but even well ahead of most non-crypto MR games, too.

So, the bottom line is that it’s going to be worth keeping a close eye on Fight Of The Ages in the days and weeks ahead. If it’s able to deliver on even a fraction of the potential it has, it’s going to change the trajectory of the GameFi market in a big way. And don’t be surprised if it manages to be the first crypto game to achieve major crossover success with conventional gamers – it has the tech, it has the quality, and it certainly contains the financial incentives to make that happen. And that will be a big win for the whole industry.