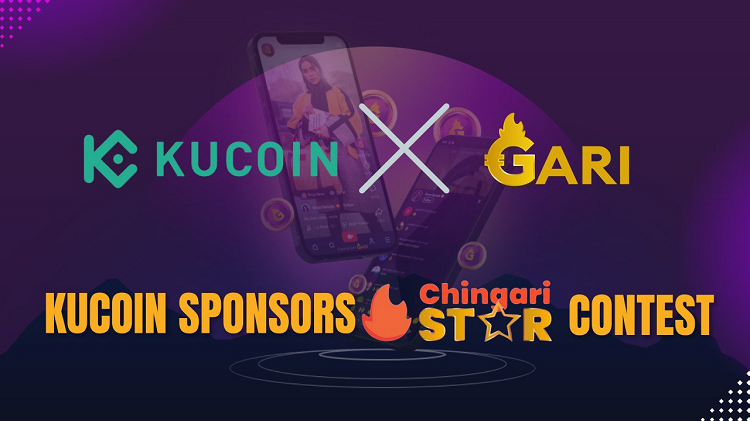 Kucoin, a leading cryptocurrency exchange has announced a partnership with Chingari, an app that allows users to share short videos. The two also announced the launch of the Chingari Star Contest that aims at rewarding Chingari app users with $GARI tokens amounting to 20 million INR.

The Chingari Star Contest which was launched on February 15, 2022, will run for the next one month and the top participants will walk home with huge prizes.

The partnership between Kucoin and Chingari is aimed at boosting content creation on the Chingari platform through identifying the upcoming talents from the most remote corners of India. Chingari offers a platform where anyone can promote themselves and their unique skills while reaching a larger audience.

The Chingari Star Contest is open for everyone including new and existing Chingari users.

Kucoin’s partnership opens up the contest to a wider selection of audience and market base that include Kucoin users.

The team behind Chingari app hopes the contest will motivate content writers to put their best foot forward in creating fresh content while also boosting their acquisition rates and experience in creating videos on the platform.

CEO and co-founder of Chingari Sumit Ghosh commented on the launch of the Chingari Star Contest and said:

“Looking at the overwhelming response that we have received from the creators so far, it only made sense to commence the contest from 15th Feb,” Ghosh added. “The extra time can be utilized by new users to build their profile on the Chingari app- and get a fair chance to win the contest against the creators that are already popular on the app.”

Kucoin’s partnership with Chingari makes the crypto exchange one of the early investors in Chingari after a funding round conducted in January that raised $35 million. Besides just partnering, the exchange also doubles up as an accelerator towards the adoption of the Chingari’s native GARI token after listing it earlier this month.

“As the accelerator and participant of the crypto industry, KuCoin is excited to join forces with Chingari to launch this contest, which will help more users become aware of, understand, and get into the crypto world.”

Participating in the Chingari Star Contest

To participate in the contest, participants will be required to complete their profiles on the Chingari platform (available on both iOS and Android through the Chingari app), upload videos on the app, and then apply to become the ultimate Chingari star.