The Pancakeswap LBLOCK / USD chart has made a new all-time high of just above $0.0075 at the time of writing.

We noted in a previous post speculating if Lucky Block token could be the next 100x altcoin that if it closed a daily candle above $0.0067 there would be little resistance left before a new ATH.

The fully diluted market cap is now approximately $750,000 based on the Lucky Block circulating supply of 100 billion tokens.

Some large buys came in on the run-up to ATH including a purchase of over 8 million LBLOCK tokens for 134.5 BNB, or $58,000. Buy amounts are tracked in the official Telegram chat group.

The next Fibonacci extension level of its current impulse move to the upside is the 2.618 Fib at $0.0086 which would also line up with retesting the highs it briefly made on LBank exchange on Feb 11th the day it was listed there. 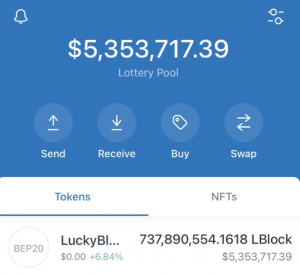 A video on the Lucky Block website explains that there will be daily jackpot draws, of which players who take part in the lottery can win up to 70% of for first prize.

10% the remainder is distributed to LBLOCK token holders even if they don’t play the lottery themselves, as a reward for holding.

Another 10% is re-invested into marketing to attract new players and 10% goes to charity, and the Lucky Block community have a say in which charitable ventures the project supports. One charity supported previously by the team was the British Red Cross.

Cryptocurrency markets are highly volatile and your investments are at risk.