The New York Stock Exchange (NYSE) is catching many off guard this week with an interesting and unique trademark filing that is signaling the exchange’s intent to build it’s own NFT marketplace.

A patent from the NYSE has been filed within the past week with the United States Patent and Trademark Office (USPTO) has suggested that the exchange is making it’s first ‘metaverse’ move. Let’s look at what we know from early reports, and what it could mean moving forward.

According to the USPTO filing, the New York Stock Exchange is registering “NYSE” for utilization of several different blockchain and crypto-adjacent goods and services, including areas like “virtual reality and augmented reality software, non-fungible tokens, and/or NFTs, and online marketplaces.” 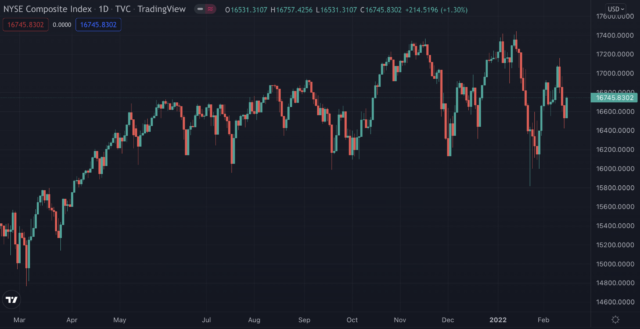 The “State” Of Affairs

The New York Stock Exchange is the world’s largest stock exchange by market cap, with average trading volumes that are often estimated in the hundreds of billions of dollars each day.

Unlike last April’s NFT release, this latest endeavor from the NYSE signals a much broader and bigger investment into the blockchain territory; while details are still spotty, it seems that the exchange will be creating a full-fledged NFT marketplace. It comes at a time when competition from market leader OpenSea has becoming increasingly fierce. Coinbase is now seemingly weeks away from their NFT marketplace, and growing marketplace LooksRare has been increasingly mentioned in recent weeks (despite a rough week in the headlines this week) – and these are just two names among many.

The trademark application also includes APIs and “cryptocurrency trading services” as well. Could this move be the first signal that the NYSE could be moving towards supporting crypto trading more broadly? With minimal U.S. regulation that has been implemented to date, the territory can easily be described as a ‘grey area’ at best for the exchange – but innovation isn’t known to wait. While ‘metaverse’ is the “flavor of the month” lately, the New York Stock Exchange utilizing blockchain APIs in stock tracking, or adopting NFTs at a much more substantial level is nothing to scoff at.