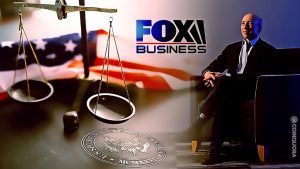 Amid the bundle of crypto irregularity cases filed by the US Securities and Exchange Commission (SEC), Chairman Gary Gensler has remarked that US securities laws are due for changes.

In a recent revelation, Gensler is reported to have told Fox Business that security-related issues are determined by the laws proposed by Congress in the 1930s. On this note, he is now challenging and questioning the grounds upon which the current technology fits into the law framework written nearly a century ago.

Today @GaryGensler told @FoxBusiness the @SECGov determines what qualifies a security based on laws written by Congress in the 1930’s. How is today’s technology supposed to fit inside a regulatory framework written nearly a century ago? U.S securities laws are due for a makeover.

Meanwhile, the crypto market is gradually flipping to a positive trend in the last 24 hours. However, investors in the country are still awaiting news on how SEC plans to regulate the market.

In other news, US Congressman Warren Davidson declared new legislation to protect the self-custody of cryptocurrency and P2P transactions.

[t]o prohibit Federal agencies from restricting the use of convertible virtual currency by a per son to purchase goods or services for the person’s own use, and for other purposes.

Warren Davidson adds that people should create and broadcast transactions from their own nodes and get self-custody of some portions of their digital assets. On the other hand, Gensler asserts that the SEC is working with the Commodity Futures Trading Commission (CFTC) on crypto regulations.

SEC has filed a lawsuit against several crypto platforms in the US including Binance US, BlockFi, Ripple, and BitConnect.

In the latest list of cases, Binance was accused of disclosing vital trading information to two major market makers in the US. Alongside this, the Binance CEO, Changpeng Zhao is also under the SEC’s watch as he is linked to them.

The SEC had also probed BlockFi for having numerous high-yielding unregistered accounts and Ripple Lab for trading 1.3 billion XRP without registering under SEC.