For a long time, Bitcoin has been subjected to a lot of criticism, unnecessary skepticism, and scrutiny. Ranging from its use in illegal transactions to energy concerns and price volatility, the king coin has seen it all over the last decade. However, the crypto’s trajectory from a market cap of $1 million in 2011 to almost $1.1 trillion this year has placed it seventh on the list of the world’s biggest assets.

In spite of all the FUDs and criticism, the fact remains that Bitcoin managed to reach $1 trillion twice as fast as Amazon and Google and three times faster than Apple. Ergo, the question – Can BTC become more valuable than any publicly traded company?

Even though arguments about Bitcoin gaining ground on gold have been around for a long time, with BTC’s current valuation (equivalent to a large-cap stock), a more realistic milestone would be becoming more valuable than any public company. While this may sound far-fetched at the moment, it’s more plausible than anyone can anticipate.

If the aim is to be bigger than any public company then ideally, Bitcoin would need to surpass Apple, the top-ranked company by market cap. At the moment, Apple’s market cap is around $2.48 trillion, more than double Bitcoin’s market cap. Recently, Ecoinometrics came up with the hypothesis that Bitcoin could take over Apple. But, how would that happen?

If we look at Apple as a moving target and assume it moves at a constant rate, then in the last 5 years its market cap has been growing at an annualized rate of 22%. The hypothesis assumes that this will continue over the next five years.

Considering that the market cap of Apple is only about 3x from BTC’s, with the current growth rate, Bitcoin would flip Apple sometime in 2023. Keeping BTC’s diminishing returns in mind, even at half the speed, the same would happen in 2026. 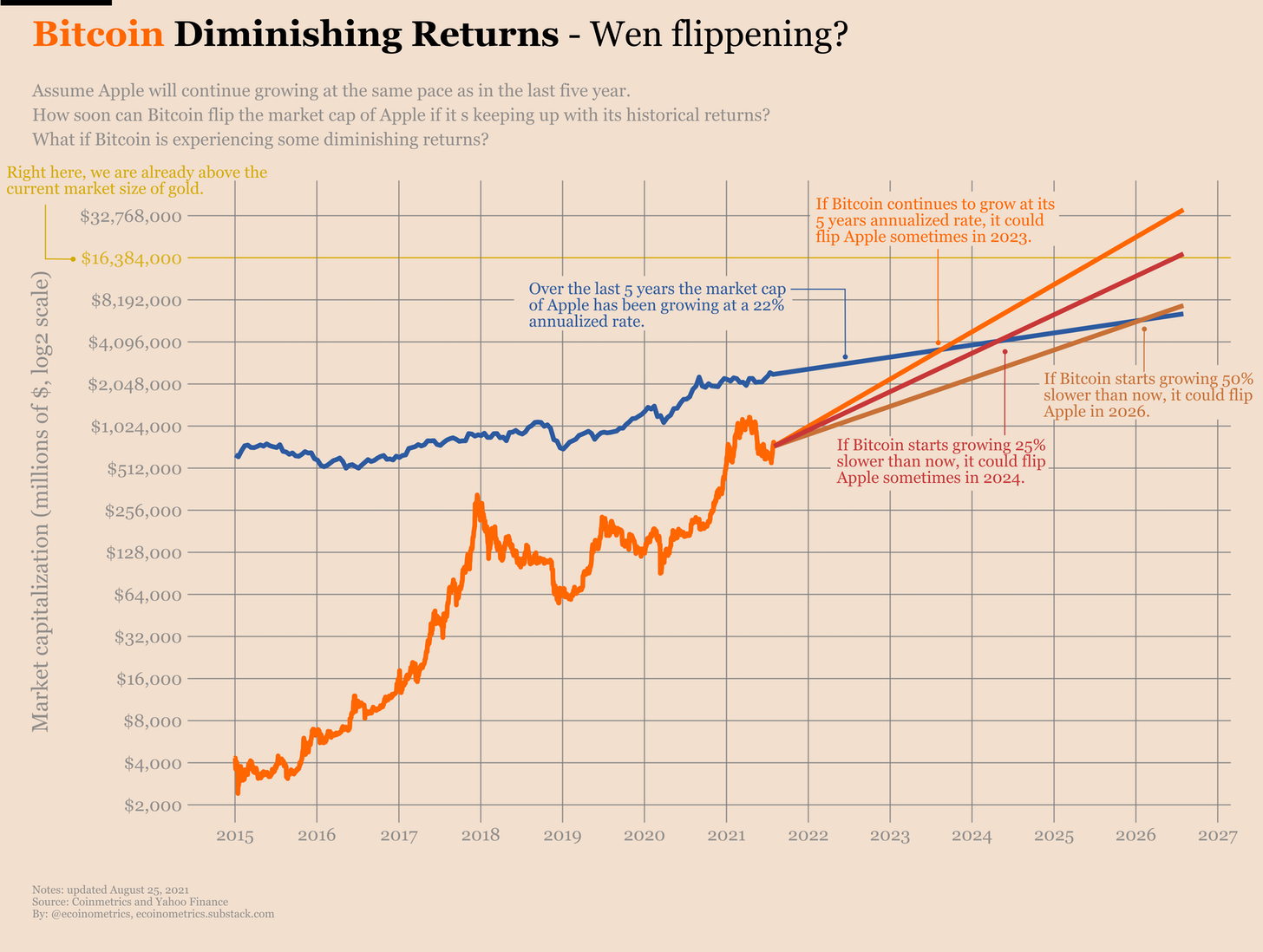 Higher returns, but is the risk worth it?

Even with diminishing returns, Bitcoin and cryptocurrencies, in general, offer more ROIs than stocks. The only reason why they may be frowned upon is the high-risk factor associated with them.

To put that into perspective, APPL’s annual return on investment in 2020 was around 26.28 %. The same for Bitcoin was over 300%. However, the volatility rollercoaster that Bitcoin goes through is way worse than Apple’s. And, here’s where APPL as a traditional investment option wins.

That, coupled with the general dilemma faced by new participants in the crypto-verse about when to enter the market, makes it far riskier. Unlike stocks, Bitcoin is not bound to rise with time, at least over low time frames. Its appreciation is looked at with a long-term perspective in mind. Not in terms of days or weeks, but months and years.

In fact, if an investor had bought BTC this year in April at around $60k, they would be at a loss right now.

That being said, even though Bitcoin can flip top stocks in the coming years, its price volatility remains a boon for some and a bane for others.