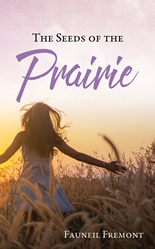 My love of historical literature and my mother and grandmother were my inspirations.

Three families of German immigrants banded together as they homesteaded the Nebraskan prairie in the 1860s. Their love, perseverance, sorrow and joy followed them into a new century and new challenges as the Great Depression hit the country and forced them to make difficult new decisions.

“My love of historical literature and my mother and grandmother were my inspirations,” said Fremont.

Fauneil Fremont was born in Hoskins, Nebraska and grew up in the Norfolk area. After graduating from the University of Nebraska, she took a study tour of Europe with the University of South Dakota. Her first teaching position in English and music was in Tucson, Arizona. While there, she earned an MEd degree from the University of Arizona. After her marriage, she returned to a study of music and earned an MA from San Jose State University. As a pipe organist, she pursued her music career in California until her husband and she retired to Santa Fe, New Mexico. Following his death, she moved to San Antonio, Texas, where she is currently residing.

Xulon Press, a division of Salem Media Group, is the world’s largest Christian self-publisher, with more than 15,000 titles published to date. The Seeds of the Prairie is available online through xulonpress.com/bookstore, amazon.com, and barnesandnoble.com.