Bitcoin Is Primed To Bounce: Here’s Why

A new relative strength index (RSI) analysis suggests that Bitcoin may soon snap back to the local highs as opposed to falling even further.

The relative strength index is a commonly-used technical indicator that shows the severity of an asset’s moves. The RSI prints certain values when an asset is technically overbought or oversold and also when it is neutral.

According to this analysis, Bitcoin’s one-week RSI is reaching a point where it has historically undergone “bounces or quick reversals.”

In the current context, this means that should history rhyme, Bitcoin will rapidly move higher in the coming weeks as a relief bounce ensues.

Similar bounces have been seen earlier this year, along with multiple times during 2017’s bull market and at least once in 2012’s bull market. The fact that so many of these technical bounces took place during the last bull market indicates there’s a good likelihood they will be seen again. 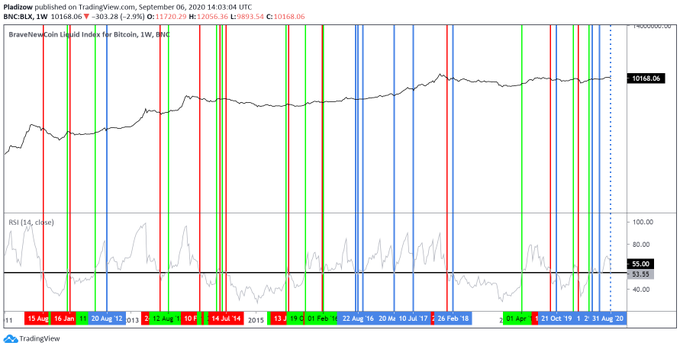 In Line With Macro Analyses

The chart shared by the analyst above is in line with many macro analyses that suggest that Bitcoin remains bullish on a macro time frame.

For one, the same trader that shared the chart above posted this one earlier this week. It suggests that Bitcoin is at a similar point in its market cycle to where BTC was in the middle of 2015, which was when the rally from the hundreds to $20,000 began.