After a nearly unstoppable rally, Bitcoin and Ethereum faced an extreme correction just an hour ago. After moving above $12,000 for the first time in a year, BTC slipped by about $1,500 in five minutes while Ethereum crashed upwards of 26%, per some reports.

This extreme move — which was arguably one of the fastest drops in the history of this market — sent ripples throughout the market.

According to one trader, $1 billion worth of Bitcoin and Ethereum futures positions were liquidated in that five minute period. This suggests that buyers were extremely overleveraged on the rally, as they presumably assumed this was a full-blown market.

Analysts are still trying to react to the extreme volatility in the price of Bitcoin and Ethereum. ETH, especially, is under the microscope as it fell as low as $303 on certain platforms, meaning it tumbled just about $112 in the span of an hour.

What’s Next for Ethereum? Analysts Weigh In

Somehow, many analysts remain optimistic about Ethereum despite the vertical drop that the asset experienced.

One trader shared that since Bitcoin held $10,500 and Ethereum held the $360 resistance, they both remain in a technical uptrend. $360 was the level at which Ethereum found a top at the peak of 2019’s rally.

The two cryptocurrencies should close above their respective support levels to confirm that bulls remain in control.

This optimism was echoed by another commentator, who shared this chart below of the ratio between Ethereum and Bitcoin (ETH/BTC). It shows that the extreme plunge that sent ETH to $303 was quickly bought up by bulls, with prices almost returning to pre-crash levels. 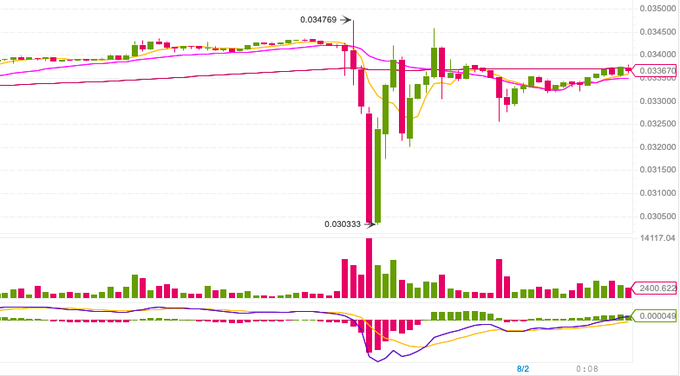 The trader says that this is a sign Ethereum remains in a macro bull market, meaning this drop is but a temporary setback.

One commentator took a more measured approach. He argued that Bitcoin and Ethereum are likely to begin range-trading here as traders, having been reset, assess what comes next:

“I think BTC and ETH just sideways now, that move is probably peak volatility of this or next few weeks. Bidding DeFi alts here because as we sideways, focus will shift again.”

According to DeFiPulse, the value of tokens locked in decentralized finance applications just surmounted $4 billion for the first time ever. This is a metric up by approximately 600% since the start of the year.

Analysts expect the adoption of DeFi to drive demand for ETH and Ethereum-based tokens, driving the prices of these assets higher over time.