Ardana is a stablecoin ecosystem consisting of a DEX, a liquidity pool, and an on-chain asset-backed stablecoin protocol built on Cardano.

Blockchain technology is undoubtedly an incredibly innovative technology, but the real breakthrough in its success isn’t limited to the technology itself but the great ideas that have expanded its potential further. Through these great ideas, blockchain became the foundation of new products and services, such as cryptocurrencies, DeFi, NFTs, and decentralized applications (dapps), just to name a few.

And it is expected that its application would further increase, thanks to the great ideas that are continuously unlocking its possibilities.

Ryan Matovu, a serial entrepreneur in the B2B/B2C sales and e-commerce field, is the founder of Ardana. He has teamed up with various experts in the blockchain arena, including ambassadors from some of the biggest tech companies to establish the Ardana decentralized exchange (DEX).

The platform’s goal is to fulfill Matovu’s dream of creating an ecosystem that can provide financing options for token holders while providing them with earning opportunities at the same time.

Matovu and his team have successfully achieved this big goal by leveraging the power of the Cardano ecosystem.

Ardana is a stablecoin ecosystem consisting of a DEX, liquidity pool, and an on-chain asset-backed stablecoin protocol built on Cardano. The Cardano blockchain operates using a proof-of-stake (PoS) consensus mechanism for discovering new blocks and adding transaction data to the protocol called Ouroboros.

The Ouroboros protocol doesn’t share the same proof-of-work (PoW) system as Bitcoin, which requires users to compete to find a new block by solving mathematical puzzles customized for this specific task. It also doesn’t have any built-in features, significantly reducing the chances of monopolistic mining activity.

The Ouroboros’ other key features include self-checking smart contracts, cross-chain transactions with other cryptocurrencies, and inbuilt scalability, governance, and compliance elements.

Ardana Vaults are permissionless and non-custodial, which means that anyone can utilize them while having total control of ownership on their funds as long as they maintain enough collateral to loan ratio.

Holders can acquire rewards through:

Danaswap is an automated market maker (AMM) DEX made for stable multi-asset pools and sits on the Cardano blockchain. It can swap between stablecoins and stable assets, including wrapped/synthetic Bitcoin with little to no slippage.

Users can also deposit Ardana stablecoins to gain passive income through interest payments. Also, they can deposit their assets into a DanaSwap pool to earn a proportion of the market-making fees.

Apart from these things, they can also swap between international stablecoins like dUSD, dGBP (Great Britain Pound), dEUR, to name a few.

The Ardana Savings Module allows dUSD holders to deposit their funds and earn an interest rate called the Ardano Savings Rate. A percentage of the platform fees are used for the savings module to better manage the supply and demand of dUSD by adding and lowering the savings rate.

A Cardano-compatible wallet is needed to use Ardana services and Cardano dApps. Moreover, ADA tokens are needed to pay for the gas fees. You will need to head over to the Ardana Dashboard or any third-party provider, which includes wallets and exchanges, to access the Ardana platform.

To interact with the protocol, users must connect their Cardano-compatible wallet and after fulfilling this step, they can now seamlessly explore Ardana and use its services.

The platform will support various currencies, including widely-used fiat currencies such as the United States Dollar (USD), the Euro (EUR), and the Great Britain Pound (GBP). These currencies will turn as stablecoins on the Ardana platform.

And since there are currently a few ways to mint on-chain-backed stablecoins other than those pegged to USD, a unique foreign currency stablecoin is anticipated to have a large international user base. Today, there may be some stablecoins for currencies other than the USD, but since these coins are not decentralized, they rely on custodians’ reserves to back them up.

Through the Ardana platform, users will have the ability to mint stablecoins of different currencies and swap between them on Danaswap, which would expand the accessibility of a fast and low-cost international foreign exchange system.

DANA is the Ardana ecosystem’s utility and governance token, which allows stakers to gain a share of the fees from Ardana and provides the privilege for token holders to vote on necessary changes on the project’s upgrades.

Users can acquire DANA tokens by participating in Ardana’s liquidity mining programs or through the open market.

For users to leverage the governance and utility ‘power’ of DANA, the platform requires to time-lock their DANA in the Ardana Reward Enhancement Module (AREM), and in exchange, they will receive exDANA, a non-tradable token.

DANA token holders can vote on the following aspects:

exDANA is a non-tradable token generated through the locking of DANA tokens on the AREM.

Users need to prolong the time of their DANA token locking as doing so will result in a better exchange rate between DANA and exDANA.

Moreover, once exDANA is acquired, regular payouts will guarantee that users can collect Ardana stablecoins/Danaswap fees by providing liquidity or holding their exDANA. For users to accurately calculate the number of exDANA needed to create the available rewards, the platform is integrated with an AREM calculator to help them obtain an accurate output.

One notable thing about dUSD is that instead of converting ADA directly into stable currency to purchase Cardano assets, users can deposit their ADA into what the platform calls ‘Ardana Vault.’

They will receive a proportion of their ADA’s value back as a freshly minted dUSD loan through this process.

After the dUSD repayment, the users can get their ADA back, and the platform will charge a minimal fee for the loan transaction.

Here are the other major features of Ardana Dollar: 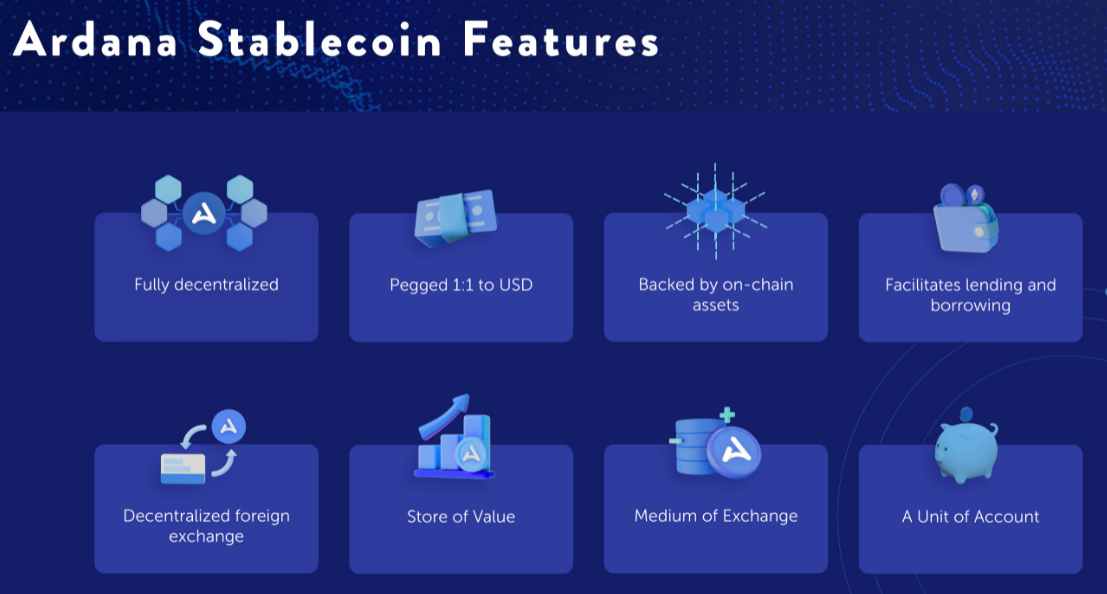 In protocol auctions, bidders compete by using Ardano stablecoins to buy the collateral from the liquidated vault by providing an increasing quantity of stablecoins.

The platform stablecoins received from the collateral auction will go to the payment of the vault’s debt and the Liquidation Penalty for that asset tokens.

The deficit will turn into protocol debt if a bid is enough to pay the vault’s outstanding obligations. The protocol debt is then paid by reserves in the Ardana Buffer, which is a reserve to cover vaults that become under-collateralized.

If the reserves in the Ardana Buffer are not enough to pay the uncovered debt, a Debt Auction is activated, and during this process, dUSD is minted and sold in an auction for the highest bidder.

The Ardana platform’s innovative system and services are proof that blockchain isn’t a mere fad but will soon have a dominating role in every industry, service, and product in the world, and the protocol’s capabilities are just the tip of what this technology can do.