Less than two weeks back, the global crypto market had crossed the $3 trillion mark in capitalization. Owing to the recent ruckus, the aforementioned level, however, couldn’t sustain for long. After noting a 6% dip in just the past 24-hours, the market cap reflected a value of $2.47 trillion, at the time of this analysis.

The highlighted downtrend has been led by large cap cryptos. Over the last seven days, all the top 10 coins have shed value in the 14%-20% bracket, with Ethereum being no exception.

During times of uncertainty, people rely on foretellers to predict the future course of action. Since the market is at an indecisive juncture at the moment, let’s delve into the magic of metrics to help us gauge the future of Ethereum.

In a recent article it was highlighted that financial astrology is nothing but mathematical psychology based on the science of astronomy. Bluntly put, it gauges the broader market sentiment. Well, no celestial object better than the moon to help us with that.

Assets usually tend to perform well during a particular lunar phase and are more prone to downfalls during the other. Moon phases can be relied upon to a fair extent, but aren’t very accurate all the time.

TradingView’s Moon Phases indicator displays moon phases on the chart. A dark circle usually indicates a full moon while a bright circle represents a new moon. The bars between full and new moons are colored accordingly – either as growing or waning.

If the chart is viewed closely, an interesting pattern can be deciphered. The fortnight following any bright-white circle depicted on the chart have more often than not been bearish. Congruently, whenever Ethereum’s price has stepped into the yellow patches on the chart, the price has mostly witnessed a rally.

Having observed the way things have panned out in the recent past, market participants can expect some action to unfold soon. 19 November is a full moon day and Ethereum’s price is set to enter the “growing” phase. In fact, at the time of writing, the candle in the making was green and Ethereum was trading very close to its daily high.

Now, before breathing a sigh of relief, it is equally important to consider other trends, especially that of market participants.

The Ethereum options’ market is set to witness a significant expiry involving 132.4k ETH on 19 November. As seen from the chart attached below, calls [buy contracts] do have the upper hand, but the puts [sell contracts] aren’t too far behind. 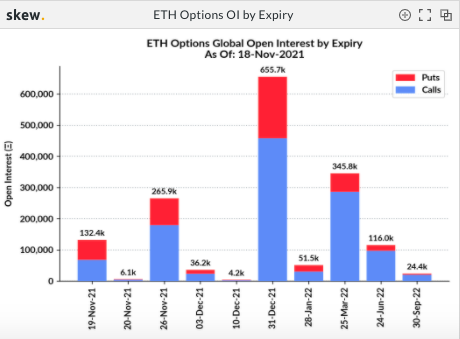 Puts are mostly dominating the proceedings in the lower price band until $4.4k and the calls clearly have a say in higher ranges. So, at the time of expiry, if Ethereum continues to revolve around its press time $4k region, bearish sentiment would end up gaining even more steam.

However, if the largest alt manages to appreciate and head above $4.4k, call owners would be triggered to use their option of buying ETH. In effect, this could help in flipping the on-going bearish narrative. 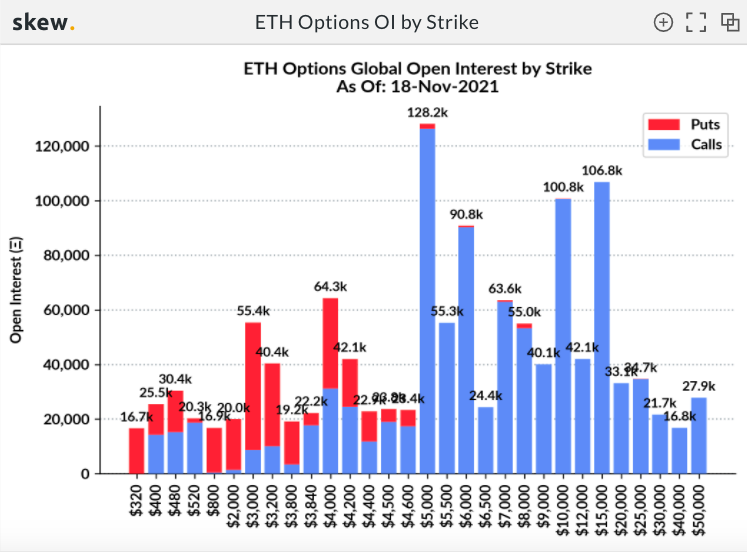 Given the pessimistic sentiment prevalent in the market, it’d be interesting to see if the moon’s magic can aid Ethereum breach $4.5k in the days to come.