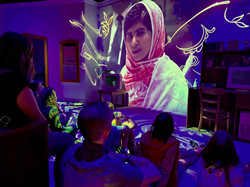 Malala talk to families about the power of education

I hope people come here and see this exhibit and see how one family, with great values of equality, justice, love, respect and empathy can change their lives at home and can also change their communities and their countries as well. – Ziauddin Yousafzai/Malala’s Father

The youngest Nobel Peace Prize recipient dared to stand up to the Taliban in a fight for education and equal rights and now serves as inspiration to others in The Power of Children: Making a Difference® experience, which opened at The Children’s Museum of Indianapolis this weekend. It is the only permanent exhibit in the world to feature Malala Yousafzai’s story and the experiences that shaped her.

The Museum worked directly with the Yousafzai family and Malala Fund to tell the story of how an intense desire for education was so strong that Malala attended school in secret and used henna to decorate her hands with mathematical equations instead of patterns. Her dream of obtaining an education could have ended when she was attacked by the Taliban for daring to speak up about the rights of girls and young women to receive an education. But Malala refused to be silenced. “Nothing changed in my life except that weakness, fear and hopelessness died. Strength, power and courage were born.”

Malala shared a special video message about the exhibit and what she hopes to accomplish. You can find it on YouTube at https://youtu.be/GuKCREG8Gc0

Malala’s inspiring story began long before she was shot in 2012. Visitors discover how Malala’s family treated her as an equal from birth. She became the first girl to be listed on the family tree in 300 years and the value of education was stressed before she could walk. Families explore a recreation of her home in the beautiful Swat Valley of Pakistan, where the local Taliban banned girls from attending school and she spoke out for four years. The exhibit showcases Malala’s family life, the challenges she faced as she attempted to get an education and the positive impact she continues to have around the world.

“I wish that people will see the power of family like Toor Pekai (Malala’s mother) and me and how we grew up in a patriarchal family; but together, we were able to create an egalitarian family—a family that believes in equality,” said Ziauddin Yousafzai. “I hope people come here and see this exhibit and see how one family, with great values of equality, justice, love, respect and empathy can change their lives at home and can also change their communities and their countries as well. Discover what the CEO of Malala Fund has to say about it here: https://youtu.be/BE9prLygRVk .

Malala has often talked about how it’s vital that others realize they’re not alone. “Malala serves as a positive role model to help those who are afraid to speak up and to help them understand that they can create a world in which all girls can live, learn and lead without fear,” said Jennifer Pace Robinson, president and CEO, The Children’s Museum of Indianapolis. “We hope that sharing the stories of extraordinary children in history can inspire children today to fight discrimination and intolerance and make a positive difference in the world.”

In this powerful exhibit, museum visitors discover the brutal realities four amazing children experienced. Families learn about Anne Frank and reflect upon what it must have been like to hide in a cramped attic for two years from Nazi soldiers during World War II. She used the power of WORDS in her diary. Children and adults visualize how 6-year-old Ruby Bridges, who was surrounded by Federal Marshals as she walked through an angry mob to be the first student to integrate her elementary school used the power of ACTION. Visitors imagine what it was like to be Ryan White—the teenager who contracted a deadly disease that struck fear into a nation. He used the power of VOICE. Malala Yousafzai is using the power of EDUCATION to empower girls to change the world. The first letters of each of those words—Words, Action, Voice and Education create the acronym WAVE and demonstrate how young people can create positive waves of change that have a powerful impact on the world.

The Power of Children: Making a Difference® exhibit is made possible by lead gifts from Deborah Simon, Efroymson Family Fund, Chase, National Endowment for the Humanities, Duke Energy Foundation, Mr. and Mrs. Jerome P. Martin, U.S. Institute of Museum and Library Services, The Cummins Foundation, and The Anne Frank House in Amsterdam. The addition of Malala Yousafzai’s story has been made possible in part by a major grant from the National Endowment for the Humanities: Democracy demands wisdom. It was also made possible in part by the Allen Whitehill Clowes Charitable Foundation, the Institute of Museum and Library Services, Corteva Agriscience, Mike and Kristin Sherman, and Lauren Sparkman. Opening day is presented by Corteva Agriscience. The Children’s Museum of Indianapolis is proud to partner with Riley Children’s at Indiana University Health, Old National Bank and Ice Miller LLP.

About the Malala Fund

Malala Fund is working for a world where all girls can learn and lead. Malala Fund advocates for resources and policy changes needed to give all girls a secondary education, invests in local education leaders and amplifies the voices of girls fighting for change. Learn more at malala.org

About The Children’s Museum of Indianapolis

The Children’s Museum of Indianapolis is a nonprofit institution committed to creating extraordinary learning experiences across the arts, sciences, and humanities that have the power to transform the lives of children and families. For more information about The Children’s Museum, visit http://www.childrensmuseum.org, follow us on Twitter @TCMIndy, Instagram@childrensmuseum, YouTube.com/IndyTCM, and Facebook.