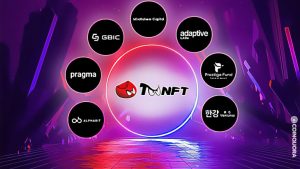 TooNFT has announced that it has been launched on top of the South-Korean-based Webtoon company, Toomics’ ecosystem. Alongside this, the TooNFT team has raised $1.75 million in a private funding round.

According to the announcement, TooNFT will use the $1.75 million to unfold its financial freedom to build a world-class decentralized webtoon platform. The company aims to increase its overall presence through the platform. HG Ventures led the funding round program.

HG Ventures were not the only company that participated in the event, rather, institutional investors such as GBIC, Alphabit, and Adaptive Labs gave intuitive support. Apart from these tech VC firms, Mindfulness Capital and Prestige Fund were present.

Moreover, TooNFT prides itself on high esteem for being on top of the premium subscription webtoon service platform Toomics ecosystem. Additionally, by operating in the Toomics ecosystem, TooNFT has a strong goal to bring the NFT concept into the comics and webtoon industry. It hopes to achieve this by improving the creative environment.

Expanding further, TooNFT intends to bring a system that will enable writers to attract investment directly in a P2P format seamlessly. All these innovations will be supercharged with the $1.75 million garnered in the private funding round.

Without any third-party support, the company will keep its eyes on details for efficiency. Also, it will merge its upcoming webtoon NFT infrastructure with blockchain and distributed ledger technology. This will bring easy investment access, safe and reliable service with transparent data rewards to users without intermediaries. Users will enjoy staking opportunities as well.

Furthermore, with the Toomics ecosystem’s 50 million users and over 2.6 billion page views from countries such as Singapore, Taiwan, and North America, TooNFT has the chance to become the top blockchain-based webtoon platform within their ecosystem.

It’s important to note that, TooNFT will commence with multilingual infrastructure in 11 languages including English, Korean, Spanish, and French. In the coming year, the TooNFT team will launch their new NFT marketplace to enable users to trade in a P2P manner.

In the future, “TooNFT” will accommodate a large number of webtoon platforms and content producers.