The on-going corrections being witnessed in the U.S. stock market has managed to fuel in fear amongst people from the crypto space too. Even though they represent completely different spectrums of the financial landscape, both the markets have historically, maintained an on-and-off relationship.

Interestingly, both markets have witnessed major bull and bear phases in synchronization. Earlier in March this year it was proved that the crypto space is not immune from big crashes witnessed in the traditional financial world. Right after that in April, it was re-asserted that bull-runs too go hand-in-hand.

The correlation that Bitcoin and the S&P 500 share has witnessed a massive upsurge since mid-August. As observed from Skew’s chart attached, the crypto market’s largest asset and the the U.S. stock market’s most prominent equity index shared a highly negative mutuality during mid-August [as low as -21% on 16 August]. However, the same has been hovering in the positive territory [35%-50% range] of late. 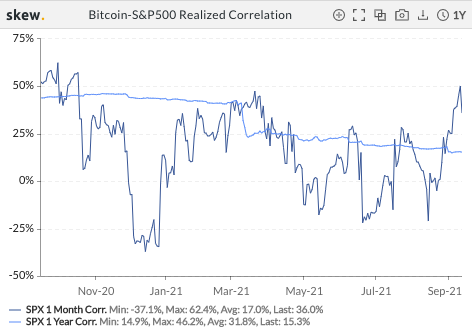 Does institutional adjustment have a say?

During the early days, Bitcoin was seldom considered by institutions as an investment option. However, as the crypto asset’s valuation started increasing, the adoption too witnessed a parallel hike, thanks to the ever-evolving market sentiment. With “smart money” remaining invested in Bitcoin as a portfolio diversification strategy, the primitive narrative has changed.

As per data from PitchBook, venture capital funds have already invested more than $17 billion this year into crypto-related companies. As seen from the chart below, this number is by far the most recorded in any single year and is nearly at par with the cumulative amount raised in all the previous years combined.

Further, the findings of one of Fidelity’s reports highlighted another interesting trend. According to the same, 7 out of 10 institutional investors expect to buy or invest in crypto assets in the near future. In fact, more than half of the respondents underlined that they already owned such investments.

Institutional money is undeniably flowing into the crypto market. Curiously, on the other hand, prominent faces from the space, like that of MicroStrategy’s CEO Michael Saylor, have been offloading stocks from their portfolios and have been making it more Bitcoin-centric. So yes, institutional adjustment has played a crucial role in altering the dynamics.

So, will the consolidation last?

Corrections are a part and parcel of every market phase. As far as the S&P is concerned, the seasonal choppiness seems to be playing spoilsport for now. Additionally, other macro-conditions – right from the shift in the central bank’s policy to the sudden job slowdown and inflation have all had a say in the ongoing downtrend.

However, the after-effects of the aforementioned factors have gradually started fading away. Further, at the time of writing, the structure of the S&P’s daily chart looked more like a typical bullish retest than a macro-trend breakdown. In fact, at press time, the market was trading in green.

Bitcoin’s price too, managed to break above the the critical $46.8 resistance level on the 14th and was trading in green [at $48.1k] at the time of writing. Institutional players putting their foot in both the boats, to a considerable extent, has impacted the mutual dependence that these two markets share with each other. In retrospect, both the markets would either smack down or continue their respective uptrends in conjunction.