Right from imposing its dominance in the DEX market to launching its Alpha L2 solution via Optimistic Ethereum (OΞ) mainnet, Uniswap has managed to keep its ball rolling. However, the DeFi protocol has also been in the news lately after a significant chunk of its tokens were dumped.

Uniswap-funded DeFi Education Fund shed half of its donated funding into stablecoins. The fund’s Twitter handle, in a recent tweet, revealed that it is selling 500,000 UNI to Genesis Trading for 10.2 million USDC in an OTC trade. However, according to its initial proposal, the fund had to liquidate its 1 million UNI holdings over the course of four to five years.

This unanticipated move managed to stir unwanted chaos in the market. People from the community did not let go of this opportunity to take a dig at Uniswap. Right from labeling the dump as “controversial” to airing concerns associated with the protocol’s governance process, Crypto-Twitter played the devil’s advocate.

However, do the token holders have to be worried about the after-effects of the dump? Everything at this stage boils down to whether or not the sell-off affected UNI’s on-chain metrics. Well, looks like the aforementioned question does have a straightforward answer after all.

For starters, the In/Out of the Money indicator, one that compares the average price of the tokens purchased to their current price, signaled most addresses to be “out of the money.” Now, that clearly is a sign that the press time price of the crypto was way lower than the average cost at which traders bought it in the first place.

Now, the difference between this indicator and the previous indicator is quite subtle. The latter takes into account all the transactions that all the addresses make in their entire history while the former focuses only on the latest transactions carried out by addresses with a balance of tokens. Having noted that, it is safe to assume that UNI’s profitability aspect wasn’t dented because of the dump.

Next, the average transaction size also pointed to another interesting trend. The token’s total transacted value that kept plunging from 7 July to 12 July changed its course and began registering an uptrend after the 13th, the day DeFi Education Fund announced its dumping. It’s worth noting, however, that the uptick registered by this indicator can be taken with a pinch of salt because a transaction can either be a buy transaction or a sell transaction.

Nonetheless, the drop in the exchange volume metric suggests that UNI tokens were moving out of exchanges, thereby signaling that people have been buying more than selling over the last couple of days. The 25.6 million UNI on exchanges on 9 July shrunk to 25.0 million by 14 July.

In fact, since the end of June, the balance on exchanges has been forming a peculiar staircase pattern and if the same trend continues, one can expect larger volumes of UNI to move into private wallets over the next few days. 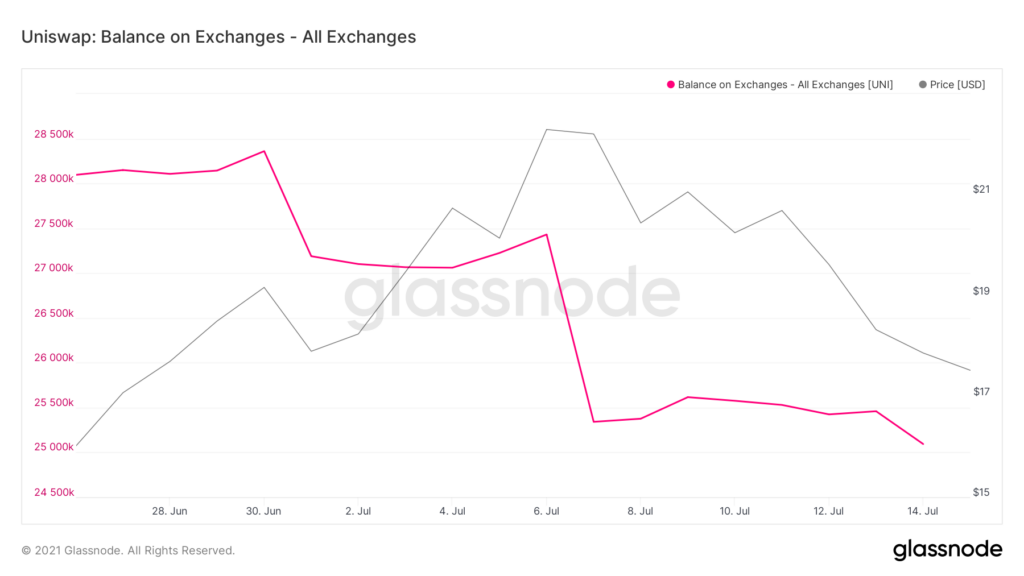 Looking at the not-so-disturbed state of the aforementioned key metrics, it can be concluded that the intensity of the dump was not that massive. In fact, at press time, UNI was trading at $17.56 after noting an uptick worth 2.7% in the last 24 hours.

That is surprising. And significant, especially since those aren’t the findings one usually expects on the back of a major sell-off like this.

Now even though the sell-off did not affect the token’s metrics or price much, it should be noted that people, including DeFi Watch founder Chris Belec, expect more transparency in the space. With calls for regulatory oversight gaining steam, only time will tell if such transparency will come anytime soon.